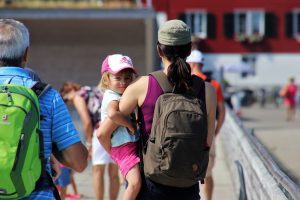 While some nannies found themselves being furloughed, others were laid off with no severance package. The Cut further reported that more than a dozen nannies had succumbed to complications related to COVID-19.

As schools across the country closed down due to the lockdown measures put in place by the government, nannies living in their own homes were requested to move into their employers’ homes to take care of the kids. Brown stated that the nannies were left with the difficult choice between safeguarding their health or financial security, which can be determined through the use of a nanny tax calculator.

It was also reported that one family told their nanny that they were moving to the Hamptons and that the nanny had to go and live them there, or the nanny would be out of employment.

The said nanny had been utilising public transport to and from work and had to deal with concerns about getting infected with the virus and spreading it to her own children.

According to a recent study, an astounding 91.5% of the nannies are female, and three out of four domestic workers are the sole income earners of their families. The study also found that 45 is the median age for domestic labourers, and they are mainly constituted of black, Hispanic, and Asian women.

The study surveyed 16,000 domestic labourers, and 52% of the respondents indicated that they were already out of employment during the week of March 30, and in the following week, that number had risen to 68%.

66% of workers were not sure if they would have their jobs back once the global health crisis is over, and more than 55% of workers said that they weren’t able to pay their rents in April.

It is estimated that a third of domestic workers are immigrants, and one in five isn’t a US citizen. The International Nanny Association revealed that nearly 95% of nannies are paid off the book or illegally, which means that this demographic isn’t eligible for stimulus checks, unemployment insurance, amongst other government benefits.

Yoon said that the nannies were asked by their employers not to visit their homes anymore to take care of their children. There was nothing along the lines of ‘I am still going to continue paying you as you deal with this pandemic.’ They were only told not to come anymore.

This crisis has increased economic insecurity.

For a sector that is ridden with low wages, little to no job security, and no safety net, the pandemic has had a devastating impact on the workers. Most have been left without a means to pay their rent, settle bills, and even feed their families.

When questioned about the existence of these chronic issues, Yoon stated that the domestic workers in the United States are indeed highly devalued.

Yoon also adds that in recent times, these issues are rooted in gender inequality. Some people don’t view work done by women as “actual work” as opposed to men who go out to work. It is often assumed that taking care of children is work that women should do, and as such, this type of work is rendered “invisible.”

Nannies allow parents to go out and do their jobs.

Various forms of coronavirus-related restrictions have been lifted in all states, and as a result, nannies across the country are being called back to work. However, this has raised concerns, especially considering that there still isn’t an anti-viral treatment or vaccine.

Yoon concluded by saying that at the end of the day, the coronavirus doesn’t discriminate, we are all in this together, and the person next to you is just as safe as you are.

How To Get A First-Time SME Loan in Singapore

The Beginner’s Guide To Vehicle Financing in Singapore

What Are The Common CBD Packaging Mistakes?

More About Laundry Machines And Its Maintenance

3 easiest Mango desserts you should make this summer